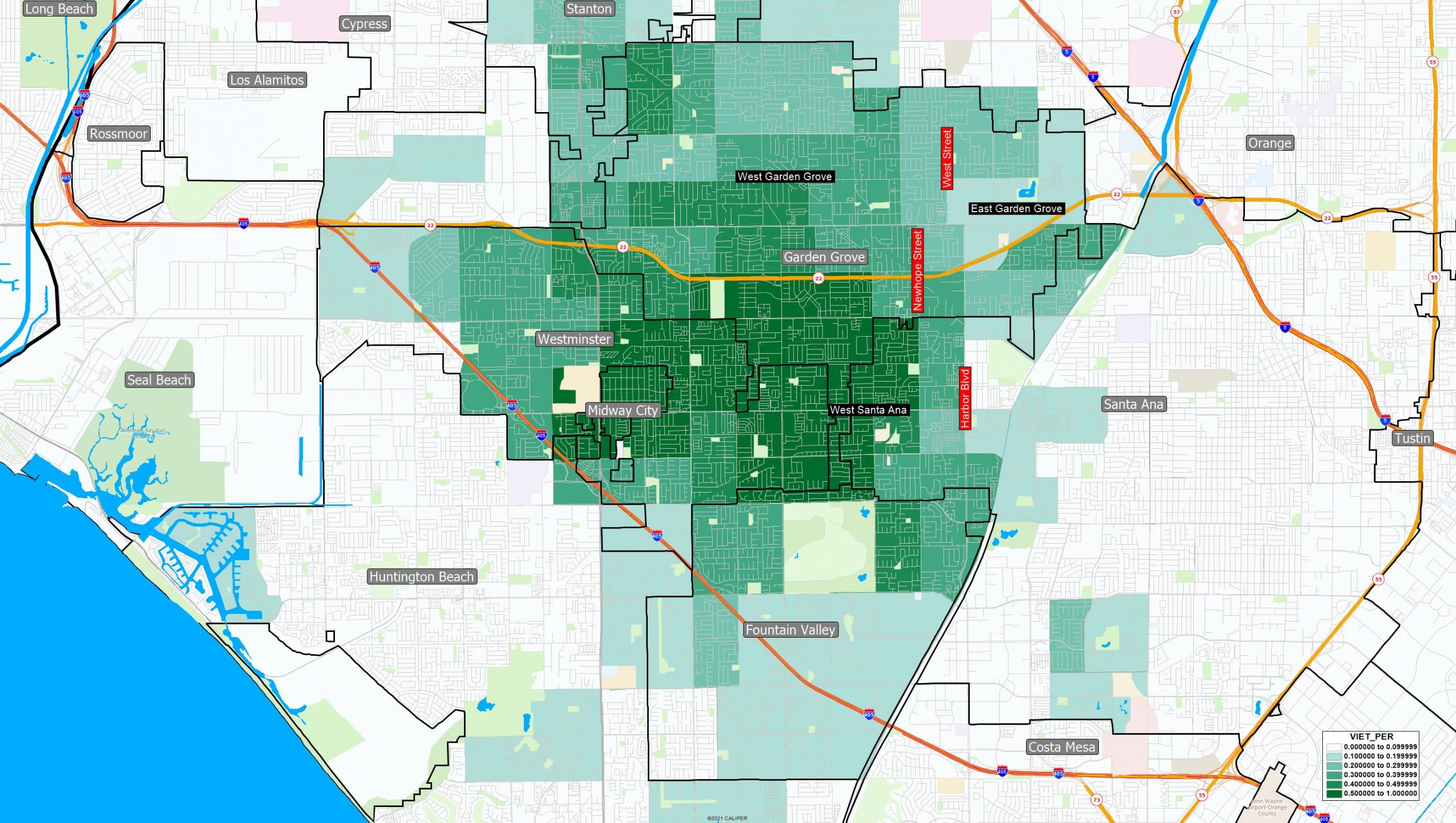 Garden Grove and Westminster are home to some of the nation’s largest Vietnamese American communities, as well as notable Korean American and Native Hawaiian and Pacific Islander (NHPI) populations.  Established after the fall of Saigon in 1975, Little Saigon has grown to encompass large portions of both cities, as well as Santa Ana west of Harbor Blvd and Fountain Valley north of the 405 Freeway.  In Garden Grove, the Vietnamese American community is primarily located west of West Street between Orangewood Ave and Garden Grove Blvd and west of Newhope Street between W Garden Grove Blvd and Westminster Blvd (see Figure E below).  Communities in these parts of Orange County are disproportionately low-income and share both common refugee experiences and the need for social services and affordable housing.

Direction:  Keep Latinx residents in Santa Ana and Anaheim, Vietnamese residents in Garden Grove and Westminster, and Korean residents in Buena Park and Cypress whole with their respective community.

Introduction:
I am Taavi Kaskla, a resident of Garden Grove. I am writing to you today as a lifetime resident of Orange County as well as a union representative for United Domestic Workers (UDW), the union that represents In-Home Supportive Service (IHSS) providers. UDW is a member of the People’s Redistricting Alliance in order to promote a greater community voice during this redistricting process.

Who my community is:
In-Home Supportive Service (or IHSS) providers are essential to our county because they allow people with disabilities to live in their own homes and communities with dignity. There are around 27,000 IHSS providers in Orange County. That number is only going up as our population ages and will need extra assistance and support. UDW asks that during this redistricting process we keep the large community of IHSS providers and the people who they care for in mind.

Where my community is located:
It is admittedly difficult to pinpoint a specific community or neighborhood where IHSS providers live because they live in all parts of the county. IHSS providers care for a wide range of people, from children with developmental complications, friends who have been disabled, to the elderly with failing health. Most IHSS providers take care of their family members and live together with them. Because there are thousands of such family homecare providers scattered across the county, it is very likely that you have one living in your neighborhood. IHSS providers who do not live with their clients commute all over the county to work.

What makes my community special is:
It is imperative that new district maps reflect fair and equitable demographics. We highly encourage you to create districts that uplift these communities instead of disenfranchising them. We would like to see Latinx communities in Santa Ana used to create Voting Rights Act districts at all levels of government. Latinx communities in West Anaheim west of the 55 Freeway should be kept together and drawn into different districts than the Anaheim Hills. The Vietnamese communities in Garden Grove and Westminster should be kept together in your maps. We also ask to keep the Korean community in Buena Park and Cypress together. Respecting these Voting Rights Act requirements and communities of interest will make it more likely for elected officials to better represent our members.

In conclusion:
Having elected officials who listen to our IHSS community is crucial because the IHSS program is funded partly by the county and partly by the state. When elected officials do not support the IHSS system and threaten cuts to the program, IHSS providers and the loved ones they care for suffer. UDW is participating in and watching this redistricting process to make sure that new districts are in the best interest of our union members and Orange County IHSS providers.

Finally, we thank the CCRC for being open and transparent so that we can participate in these hearings.

Introduction:
Good afternoon, my name is Caroline Nguyen. I’m a Garden Grove resident and I’m here on behalf of the California Healthy Nail Salon Collaborative. Our organization works to improve the health, safety, and rights of the nail and beauty care workforce to achieve a more sustainable and just industry. We’re also a member of the People’s Redistricting Alliance, which is a coalition of 15 community-based organizations established to promote a greater community voice in statewide and local redistricting processes in Orange County.

Who my community is:
Our community of interest is nail salon workers, who have a deep historical connection and origin in Southern California. In the 1970’s, a group of 20 Vietnamese women were trained on how to do manicures at a refugee camp. Afterwards, they became licensed and found jobs at salons across Southern California. As war continued to drive an influx of Southeast Asian immigrants and refugees into the United States, many sought financial security by taking on low-wage jobs, such as those in nail salons.

Where my community is located:
Today, a little under 70% of nail technicians in California are Vietnamese. As many of us know, Little Saigon in Orange County is home to the largest Vietnamese population in the U.S. This means that while nail salons themselves may be geographically dispersed across Orange County, a significant proportion of its workforce live in the cities that make up Little Saigon, most notably Westminster, West Garden Grove, and West Santa Ana.

What makes my community special is:
Nail salon workers experience chronic exposure to a host of chemicals and toxins that are known to be cancer-causing agents. For 6 days a week, 10 hours a day, they handle glues, polishes, acetone, and other products that cause symptoms like skin rashes and asthma, as well as more long-term health complications like miscarriages and infertility.

Beyond the environmental impacts, manicurists also experience wage theft and labor violations. Nail salon workers earn an average of 25k a year.  They have often been misclassified as independent contractors instead of employees and are therefore denied critical protections such as sick time, workers’ comp, and breaks. A recent example of how this can be a barrier is during California’s first lockdown in March 2020, manicurists who were misclassified as 1099 workers instead of W2 employees were not eligible for unemployment insurance. It wasn’t until a second relief package was introduced a few months later that they gained access to these benefits.

My community is similar to the following neighborhoods:
Because of these shared challenges, areas in which many Vietnamese nail salon workers live—Westminster and West Garden Grove—should be kept together. Santa Ana West of Harbor Blvd should be included in the same district as well, because this region is home to a sizable Vietnamese community that has historically been excluded from consideration in Santa Ana municipal governance and decision-making processes.

My community is different from the following neighborhoods:
East Garden Grove, however, has a large Latinx population and should not be grouped with the more heavily Vietnamese-populated West Garden Grove and Westminster.  We support the creation of a federal Voting Rights Act district that keeps East Garden Grove—from West St to West Garden Grove Blvd to Newhope St—with neighboring areas like East Santa Ana that share similar racial demographics.

In conclusion:
The nail salon industry has tripled over the last 2 decades and now generates over 7 billion dollars in revenue annually. As the demand for nail services continues to rise, it is vital that we sustain the political presence and cohesion of a workforce that has been facing a long-overlooked epidemic of health, socioeconomic, and labor concerns.

Introduction:
Hi, my name is Vincent Tran. I am writing on behalf of VietRISE, an organization that works to advance social justice and build power with working class Vietnamese and immigrant communities in Orange County. We build leadership and create systemic change through organizing, narrative change, cultural empowerment, and civic engagement. As part of our organizing and civic engagement work, we are a founding member of the People’s Redistricting Alliance, a coalition of 16 community-based organizations established to promote a greater community voice in statewide and local redistricting processes here in Orange County.

Who my community is:
Our communities of interest include the Vietnamese and broader Southeast Asian communities, who share experiences associated with being both low-income and immigrants and refugees, as well as face challenges living in non-traditional housing and mobile home parks.

Where my community is located:

My community is similar to the following neighborhoods:
The Vietnamese community is similar to the Korean community in West Garden Grove. Due to a long history of interaction amongst these communities starting in the late 1970s, when the Vietnamese community began to take root in Santa Ana and grew westward into Garden Grove, Westminster, and Fountain Valley, there is a commonality with shared education, working & living conditions, along with immigration experiences. For example, many residents work together in the service industry, such as restaurants, cafes, or supermarkets, and their children attend the same schools and partake in the same recreational activities.

My community is different from the following neighborhoods:
East Garden Grove, which consists of a large population of Latinx residents, aligns much more with the experiences of residents in Santa Ana rather than other parts of Garden Grove. Many residents in that part of East Garden Grove own businesses and work in the neighborhood cities of Anaheim and Santa Ana and their children oftentimes are enrolled in schools that fall within the Santa Ana Unified School District or the Anaheim Union High School District. Because of these lived experiences, East Garden Grove should be paired with neighboring cities – Anaheim and East Santa Ana – that they directly experience and have interactions with on a daily basis rather than the parts of Garden Grove which there is much less interaction with the Vietnamese majority population.

What makes my community special is:

Little Saigon, which includes the cities of Garden Grove, Westminster, West Santa Ana, Midway City, Fountain Valley (north of the 405 Freeway), and the encompassing areas contain the largest Vietnamese American community in the U.S. Today, there are approximately over 200,000 Vietnamese living in Orange County. The Vietnamese community within these cities are diverse in immigration history and lived experience, however, their shared culture is a defining characteristic that brings them together. Particularly, because the majority of the Vietnamese community are foreign born, Little Saigon is especially important due to it being the epicenter of the community. In this epicenter, Vietnamese seniors are able to access their community resources, find social services, purchase their groceries, and receive culturally competent medical service. It also serves as an inflection point of community change between 1st and 2nd generation Vietnamese Americans.

Another side of the community that is not as publicly highlighted, however, is equally important are the large population of mobile home park residents who reside in Westminster, Central Garden Grove, and West Santa Ana. The majority of these residents are seniors and mainly rely on their Social Security income and/or disability check to be able to afford their housing expenses. Since 2010, there has been an increased threat towards the sustainability and survival of the mobile home communities. This is a result of mobile home sale offs, rent increases, and redevelopment. This has resulted in the senior Vietnamese residents at the Green Lantern Mobile Home park in Westminster and the Bali Hi Mobile Home Park in Santa Ana have joined together to protect their homes and prevent rent increases. These shared experiences, thus, show us that there is a great need to keep these communities together rather than separate.

In conclusion:
Our community of interest is the Vietnamese community, whose boundaries cross city lines and should be kept together in legislative districts. It is aligned with other low-income, immigrant, and refugee communities, as well as those who face challenges associated with access to affordable housing. Thank you.