Skip to the content
Home
What is redistricting?
Communities of interest
Proposals
New Districts
Media 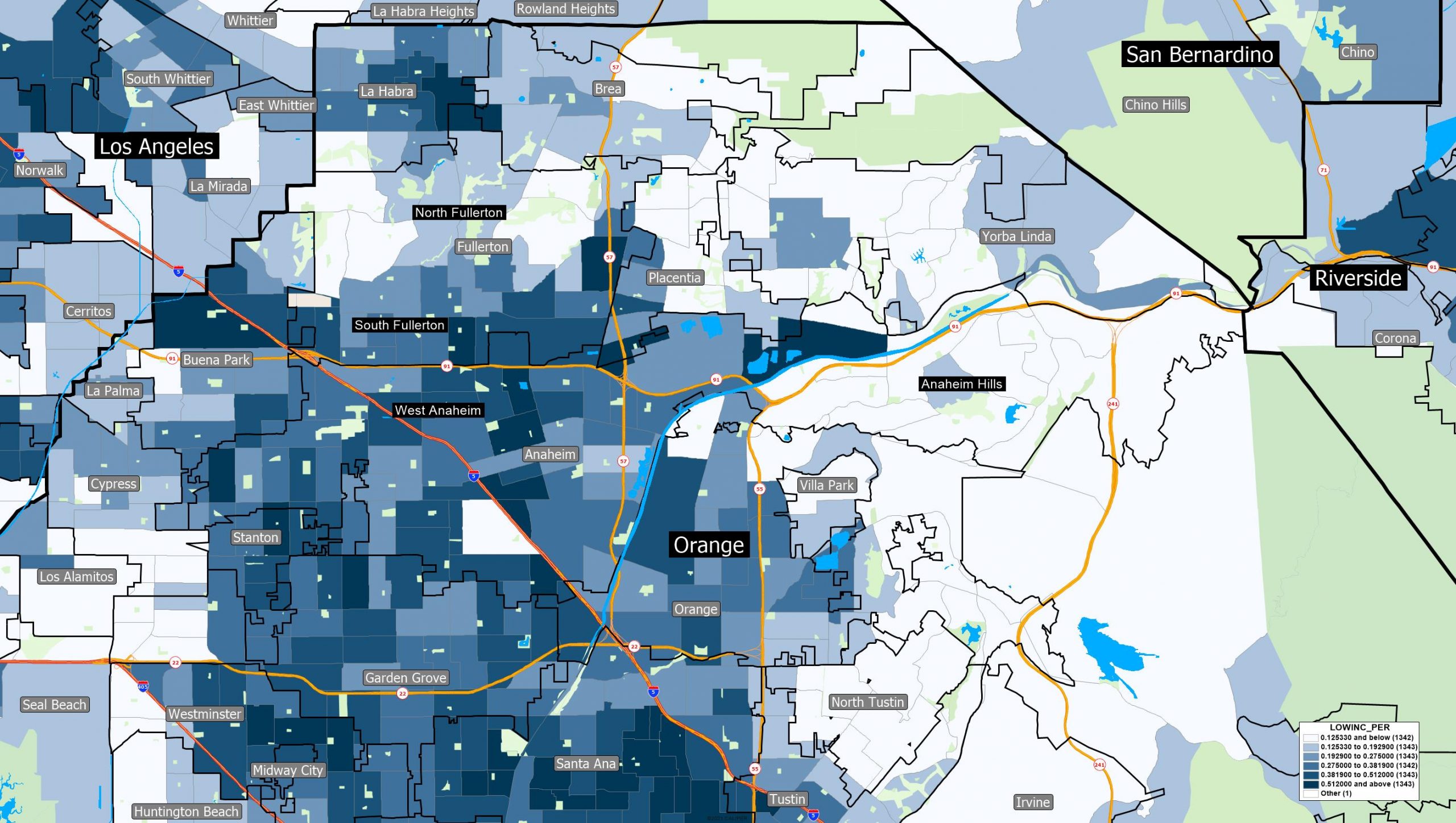 Two of Orange County’s largest cities, both Fullerton and Anaheim are socially and economically diverse with clear divisions between those with considerable needs and more affluent residents. In Figure B, Census Bureau data on low-income population show dramatic differences within each city.  In Fullerton, the lower income area of south Fullerton and the higher income north Fullerton are roughly divided by Chapman Ave. In Anaheim, the lower income west Anaheim and the higher income Anaheim Hills are roughly divided by the 55 Freeway. Low-income residents in South Fullerton and west Anaheim share common challenges, including environmental justice concerns and access to affordable housing.

Guidance:  South Fullerton (south of Chapman Ave) and west Anaheim (west of the 55 Freeway) should be drawn together and apart from more affluent communities in Yorba Linda and the Anaheim Hills.

Hello Supervisor Chaffee, my name is Karen Alvarado and I represent the Orange County Congregation Community Organization (OCCCO). OCCCO works to empower individuals and congregations to use their voice to make positive, lasting change within low-income communities of color. Since 2017, we have trained more than 200 faith-based community members through our Leadership Academy. We’ve had over 30,000 conversations with voters in low-income communities of color during the past five years and involved hundreds of youth in civic engagement. Our current work focuses on Housing with Dignity, Education Justice, and Immigration Rights. We are also a member of the People’s Redistricting Alliance, a coalition of 15 community-based organizations established to promote a greater community voice in statewide and local redistricting processes here in Orange County.

Some of the similarities that our communities of interest in West Anaheim and South Fullerton share are that they are predominantly hard-working, immigrant, low income communities of color, facing a lack of affordable housing, contributing to their increasing homeless population. Our communities are impacted by the priority that is placed on tourism in these areas by our local policymakers and thus, leaves our communities with dense neighborhoods and overcrowded housing. This clearly portrays some of the key differences between the communities in West Anaheim and South Fullerton in comparison to those in the Anaheim Hills and Yorba Linda. Anaheim Hills and Yorba are predominantly white, affluent, well-maintained communities who don’t experience or rarely experience the same housing and homelessness situations that our communities of interest do.

In conclusion, keeping West Anaheim and South Fullerton together in a supervisorial district is imperative for low-income Latinx communities throughout the northern part of the county, who need to speak collectively with one voice. As our community continues to grow, it is important to preserve the culture they bring while also adapting to changes in their surrounding neighborhoods. Multigenerational residents have continued to fight gentrification; the only way for the needs of these communities to be heard and not ignored by local policy makers would be to not divide them.

My name is Kayla Asato and I am the redistricting organizer for Orange County Environmental Justice. As our name suggests, OCEJ fights for environmental justice in water quality, cleaning the lead from our soils, better air quality, and electoral change to make all of this happen. We mostly do work in the cities of Santa Ana, Anaheim, and Fullerton. In addition, we are a member of the People’s Redistricting Alliance, a coalition of 15 community-based organizations established to promote a greater community voice in statewide and local redistricting processes here in OC.

Because of the work that we do, especially with disadvantaged communities dismissed by our political establishment, our communities of interest typically include low-income communities of color facing environmental justice concerns, many undocumented. Our communities in Fullerton, Anaheim, and Santa Ana are similarly impacted by soil lead levels, sometimes exceeding 50x the recommended limit, ignored when voicing their concerns about water quality due to poor pipes and other infrastructure concerns, or even horrendous air quality from traffic and oil plumes. These devastating environmental justice issues are often overlooked by policy makers, while low-income and mostly Latinx communities already facing problems like housing injustice and police brutality, pay the price.

In Fullerton, our communities of interest are generally south of Chapman Avenue near the Anaheim border. In Anaheim, they are located west of the 55 freeway. In Santa Ana, they are located throughout the city. While these areas face similar environmental justice challenges, they are very different than cities to the north and east like Yorba Linda, areas that face SUBSTANTIALLY less environmental burdens, and have more housing security as a result.

Across these cities, environmental justice is one of MANY challenges our communities face. In Santa Ana, communities have been demanding change and remediation for the soil lead crisis for over four decades, but it still is not seeing substantial progress in the general plan. In Anaheim, communities aren’t even getting acknowledgement of Little Arabia, let alone the support for action on the oil plume. In Fullerton, we know that there still has not been any justice for Hector Hernandez and other victims of police brutality, nor has there been action on housing, stopping gentrification, or on Ethnic Studies. These are layered issues impacting those that are ignored the most, heard the least, and lack representation. And that is unacceptable.

And as such, it is essential that these communities of interest are kept together to grow the electoral strength and voice they desperately need. We need power to offset the harm that has been done to our communities and advocate for the changes that we need to achieve even a semblance of equity if not liberation. Let our voices be heard, and allow us to be part of the democratic process.

Good afternoon, my name is Susan Cheng and I am speaking on behalf of AHRI for Justice. Our organization serves low-income individuals and families, undocumented workers, young people, and survivors of domestic violence through our many programs such as civic engagement, youth organizing, and direct legal services. In addition we are a member of the People’s Redistricting Alliance, a coalition of 16 community-based organizations established to promote a greater community voice in statewide and local redistricting processes here in Orange County.

The communities of interest we serve in the city of Fullerton and Buena Park primarily consist of Asian American, Latinx, Pacific Islander, undocumented & immigrant communities, LGBTQ+ folks, and low-income communities of color. Many of these communities face similar issues due to the lack of resources provided, such as lack of affordable housing due to gentrification. And even lack of resources and support when cities were shut down due to Stay At Home orders back in March last year. Yet, these communities are the backbone of the cities’ abundant small businesses and cultural landscape. We are also seeing more and more young folks from the large student populations of Cal State Fullerton and Fullerton College being actively involved in Fullerton’s civic life. These young and

working-class residents living in Fullerton and surrounding cities like Buena Park, want nothing more than to have their fair share of resources so their communities can thrive. Many of the students we work with want to see Ethnic Studies implemented in K-12 schools. They want community gardens, affordable housing, and accessible mental health resources. Again and again, the needs of our underserved communities such as Asian American, Latinx, Pacific Islander, immigrant, and low income communities of color are not addressed. Even when immigrant communities do want to get involved, there are obstacles such as language barriers, accessibility, time restraints, and even more that further distance folks from being able to use their voice. Instead the focus tends to be on tourism and businesses such as the vacation spots down Beach Blvd, like Knotts Berry Farm, and the Downtown Fullerton business district rather than prioritizing marginalized folks who are the pillar of the community.

Now more than ever, it is time for this to change. It is crucial that our communities in Fullerton and Buena Park are kept together because they share similar struggles and experiences. By staying together, we have a stronger voice to ensure that policymakers will address our needs.