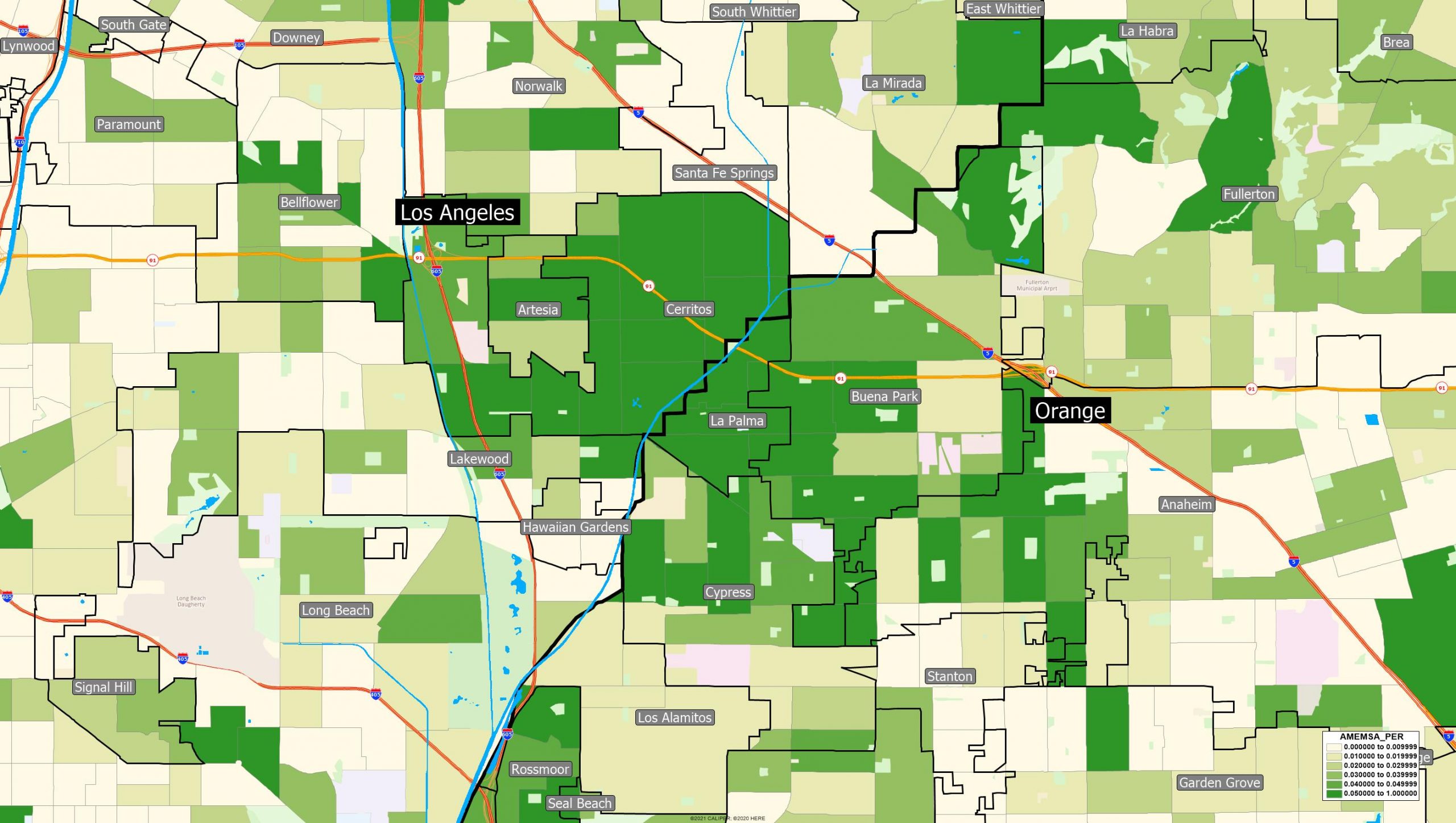 Orange County is home to large and growing Arab, Middle Eastern, Muslim, and South Asian (AMEMSA) communities.  These populations are particularly prominent along the border of Los Angeles and Orange Counties, where the cities of Buena Park, La Palma, Cypress, Cerritos, and Artesia come together across county lines (see darker green shaded areas in Figure A below).  In Buena Park, AMEMSA communities are located primarily south of the 5 Freeway, where important religious centers such as the Gurdwara Singh Saba and Gurdwara Buena Park are also located. Together, these five cities share more in common with other communities in Orange County than they do with Los Angeles County and should be drawn into Orange County-based districts where possible.  As part of their daily lives, AMEMSA communities in Orange County cross into Los Angeles County to shop in ethnic markets, dine in restaurants, worship, and access social services in Artesia and Cerritos. Institutions in Cerritos and Artesia like the Islamic Center of Cerritos, Baitul Mukarram, Al Burooj Academy, and the headquarters of Islamic Relief are particularly important to Orange County residents.

Guidance:  Buena Park (south of the 5 Freeway) and Cypress should be drawn together with Cerritos and Artesia in Orange County-based districts.

Introduction:
Hi, my name is Hina Ahmad. I am writing on behalf of the South Asian Network. Our organization provides culturally and linguistically sensitive direct services to the South Asian community in the areas of healthcare access, civil and immigrant rights, and gender based violence. In addition we are a member of the People’s Redistricting Alliance, a coalition of 16 community-based organizations established to promote a greater community voice in statewide and local redistricting processes here in Orange County.

Where my community is located:
My community is located near the many faith based institutions that serve the region, including the Buena Park Gurdwara on Orangethorpe and Knott and “Little India” in Artesia. These communities have south South Asian grocery stores, clothing stores and restaurants close together, creating a unique gathering place for community members. These religious and cultural institutions/community centers are what make Artesia, the “Little India” of California! The South Asian Network is also in the heart of Little India, and we provide citizenship, public benefit, mental health and food assistance to our community, primarily in Artesia, Buena Park and Cerritos.

My community is similar to the following neighborhoods:
My community is similar to other neighborhoods in the region in that it is diverse in its language capacities, faith, socioeconomic status, countries of origin, education, immigration status, and more. The temples and places of worship in Buena Park, Artesia, and Cerritos have continued to embrace the community around them and provide resources to their neighbors, regardless of ethnic backgrounds or religious affiliations. These communities should be kept together in the same interest. With common interest, the communities in these cities continue to care deeply for one another.

What makes my community special is:
Its diversity and it’s very specific needs. It is important that the voices and needs of the South Asian community are heard and understood by elected officials. South Asians are often perceived as affluent professionals. Yet many South Asians are living in poverty, hiding in the shadows, fearful of alienating immigration policies, unable to access resources due to limited language capacities. The COVID-19 pandemic highlighted what many South Asians know – we need in language resources to access support like healthcare access, financial support, public health education, community and mental health support, and so much more.

Introduction:
Hi, my name is Fayaz Nawabi, and I’m writing on behalf of the Council on American-Islamic Relations (CAIR-LA). As part of our organizing and advocacy, we are a member of the People’s Redistricting Alliance, a coalition of 16 community-based organizations established to promote a greater community voice in statewide and local redistricting processes here in Orange County.

Who my community is:
My community is Arab, Middle Eastern, Muslim, South Asian, North African, immigrant and refugees that live in Artesia, Cypress, Cerritos and Buena Park. My community also consists of low/middle income families, minimum wage workers, renters with some homeowners here and there.

Where my community is located:
My community is in Artesia, Buena Park, Cypress, and Cerritos. The current political district boundaries divide our community. We would like to see our community be kept intact and together. Artesia in particular is a major shopping district that is known in Southern California for its South Asian restaurants and clothing shops. Families as far as San Diego visit Artesia to shop at these South Asian Ethnic boutiques.

In addition, Islamic Relief the largest Muslim humanitarian relief organization is located in Buena Park. Islamic Relief employs many members of the AMEMSA and North African community and their headquarters is used as a meeting place for the AMEMSA and North African community in the areas of Buena Park, Cypress, Artesia and Cerritos.